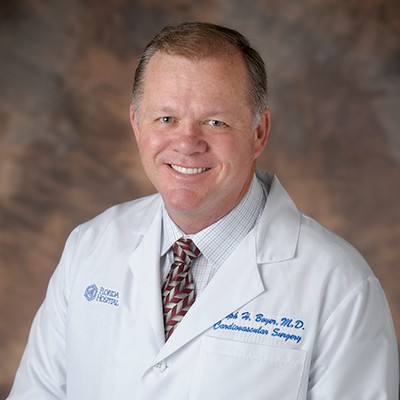 Joseph H. Boyer Jr., MD earned his medical degree from SUNY Upstate Medical Center in Syracuse, New York. During his medical training, Dr. Boyer was elected into the National Medical School Honor Society, known as Alpha Omega Alpha (AOA), and graduated cum laude in 1983 near the top of his class. He went on to serve as an intern and resident under the instruction of Dr. David Fromm at SUNY Upstate Medical Center. Dr. Boyer completed his Chief Residency in General Surgery in 1988, and received American Board of Surgery (ABS) certification in 1989. Dr. Boyer was also elected as a Fellow of the American College of Surgeons (FACS). Dr. Boyer completed a residency with internationally acclaimed surgeon Dr. Roque Pifarre in Cardiothoracic and Vascular Surgery at Loyola Stritch Medical Center in Chicago, IL. In addition, he served six month rotations at the Hines Veterans Administration Hospital and Chicago Children’s Hospital and achieved certification by the American Board of Thoracic Surgery in 1991 and Recertification in 2001.

Dr. Boyer is a member of the prestigious organization of “The Society of Thoracic Surgeons” (STS). Currently, he serves as Co-Director of the Thoracic Cancer Program at the AdventHealth Cancer Institute which is part of AdventHealth. Most recently, Dr. Boyer accepted a Leadership position as Section Chief for the Department of Surgery with the AdventHealth.